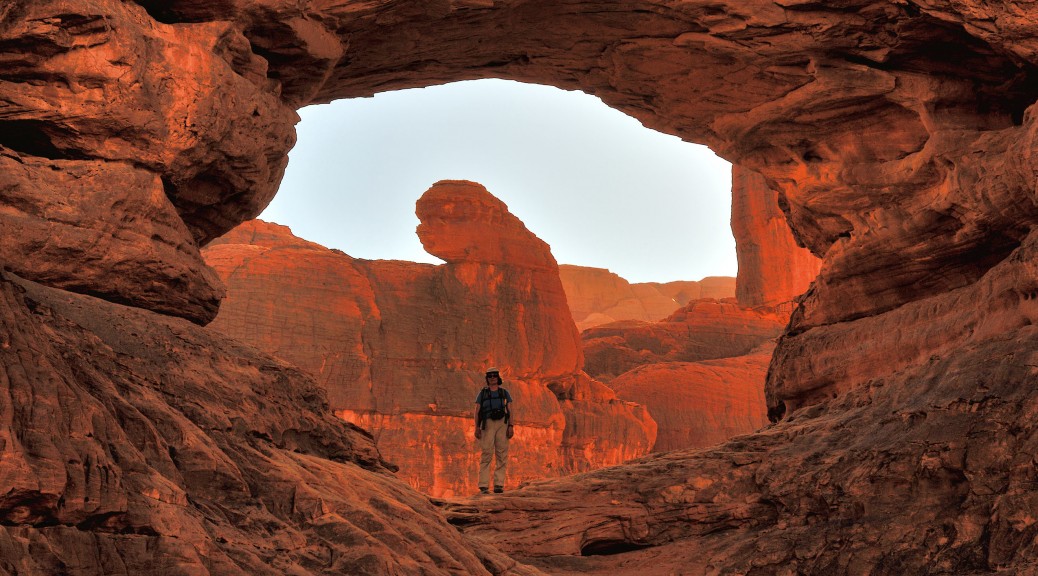 Since the first reports of the early Africa explorers of the 19th century it was known that the Sahara is really not the safest place on Earth. But it was always possible to visit at least some of the magic places in the central Sahara with limited risk. Unfortunately the situation has become a lot worse in the last couple of years. Nowadays you have not only to handle the “normal” criminals, kidnappers, smugglers and corrupt officials, but also the terrorists of Al-Qaeda and the so-called Islamic State. Chad has received the financial and military help of France to assist with such problems.

Chad Ennedi Gallery: Click on any image for slide show, ESC to return.

In 2011 and 2012 my wife and I visited Chad for three weeks each time. In 2011 the traverse of Emi Kousi attracted us (see SPAN Spring 2013). It is an extinct volcano and actually the highest elevation not only in the Tibesti Mountains but in the whole Sahara. In 2012 it was the Ennedi Plateau, a wonderland of rocks, outstanding rock art, and home of some of the very last desert crocodiles. Both trips had an expedition-like character which definitely needed good preparation and organization. This job was done perfectly by Spazi d’Avventura, an Italian family-based tour operator with decades of experience in Niger and Chad (www.spazidavventura.com).

Both trips started in N’Djanema, Chad’s capital, which can be reached by plane via Paris with Air France, or via Addis Abbaba with Ethiopian Airlines, which is also a pretty good and reliable carrier. Spazi picked us up directly at the airport and helped with the paperwork for entering the country. We soon found out that the people on the tour all came from different European countries with different languages, but fortunately everyone was happy with English. Our Toyota Land Cruisers (two for Tibesti and three for Ennedi) were soon loaded and off we went!

In many African countries the Chinese are building new roads and this is the case in Chad too. Nevertheless we reached the end of the pavement in a few hours. From there on it was off road driving, sometimes easy, sometimes difficult. It took us three full days to reach the Ennedi and two more to get to the border of the Tibesti.

This part of the trip was a bit boring because there is not much to see in the Sahel zone most of the time. The big excitement was whenever we reached a water reservoir or a well. It was absolutely fascinating to see the nomads come and go with all their different type of cattle, goats, sheep, horses and camels. But it was also very sad to find long stretches of land with almost no vegetation, the result of grazing too many cows here. The more north and east we came, the fewer people we saw. Then all of a sudden we found ourselves in the world’s biggest desert, the Sahara.

Safe driving in the Sahara needs some precautions: at least two cars, lots of spare parts, and someone who can fix a lot more than just a flat tire, and without a garage. If you can’t take enough fuel with you in canisters, then a private gas depot somewhere is necessary. Spazi had all of this. 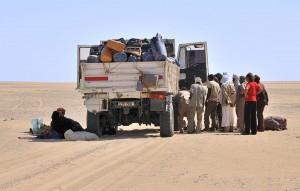 The importance of safety precautions became obvious to us when we met a group of people (men, women and children) right in the middle of nowhere, hundreds of miles from the next little village and water source. The previous day their truck had suddenly stopped and they were not able to repair it, and they had no satellite phone to call for help. It was just a lucky chance that we came along. It took our car mechanic about 20 minutes to find out that the injection pump was out of order and the battery was dead. We gave these unlucky fellows as much water as possible and then had to leave.

Water is of course rare in the desert. Whenever we came close to a well, we took the opportunity to fill up our stock of water. Normally lots of nomads were already there waiting to take their turn. In situations like this our local guide Muhammad was of inestimable value. This was not only the case in the Ennedi but in particular in the Tibesti which is even more wild and untouched.

Muhammad arranged for an additional guide for the drive through a field of land mines, and also for a couple of locals with pack camels for the traverse of Emi Koussi on the first trip. Muhammad was respected a lot because of his status as a “mustati”—a man who has finished the hajj (pilgrimage) to Mecca. In spite of the knife in his sleeve and the Kalashnikov assault rifle on his back, he was a nice guy. 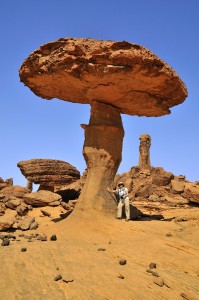 Hiking the Ennedi was most often nothing less than spectacular, at least for an inveterate desert lover like me. It was not too tough because we always had a long lunch break at a place with nice shade. 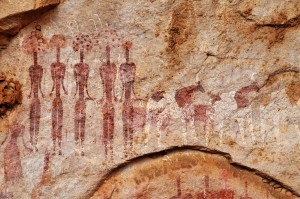 We reached the campsite normally in the late afternoon, erected Spazi’s excellent desert tents, had tea or explored alcoves close by for rock art (the Ennedi has ubiquitous rock art from the last five millennia).

Dinner was great Italian cuisine. When it was not too windy we slept outside the tent and enjoyed the night sky full of stars.

With the exception of the huge Aloba Arch we never looked for arches on purpose, but ran into them more or less accidentally. In the Tibesti we found just a handful of them, but in the Ennedi on every hike we saw several really big, beautiful and most remarkable arches. Some of them have been known to us for years from the pioneering work of my friend Gunter Welz (www.archhunter.de), others were known only from aerial photos, and many were completely new.

On both trips we just had one night in a hotel, the last night. On the Tibesti trip it was a hotel a bit outside the capital city situated very nicely along a river that flows into Lake Chad. It was run by a French guy at that time. Having the first cold beer after many days and looking out onto the river was great. On the Ennedi trip we had a really good hotel in town and were invited by Spazi for dinner in a nice restaurant. The next day they brought us to the airport and waited until we all went through security. Very good and conscientious work on the part of Spazi.

As you know, there are arches spread out all over the world. But they are not equally distributed over the Earth’s surface; some places have large clusters of them. The best places for arch-hunting I have seen so far are Arches National Park in the U.S., Kukenan Tepui in Venezuela, Tassili n’Ajjer in Algeria and…you guessed it, the Ennedi Plateau in Chad!

If you are interested in more photos, please visit my website www.hike-wild.de. If you have questions, don’t hesitate to email me (Peter-Felix-Schaefer@t-online.de).

Organization of a tailor-made trip for arch hunters to the Ennedi is easy, but to get a good price at least five to six people are necessary. The best time of the year for a trip is from November to February, with the very best month being November. It might become one of the most memorable trips of your life!

Travel Warnings (added by editor): Although NABS members have traveled in Chad without incident, readers need to be aware of travel warnings issued: