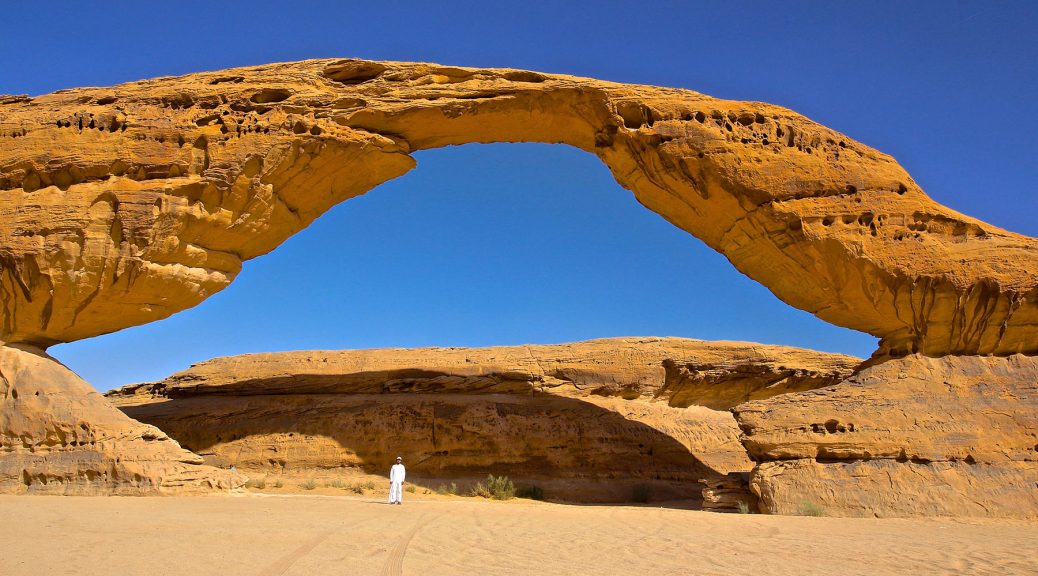 Saudi Arabia: A Land of Arches; so said the article on the internet and while it is no Chad in the number and extent of natural arches, those that are found in Saudi Arabia are large and truly spectacular. For a long time Saudi Arabia was a closed country for normal visitors, but things are beginning to change. Before 2019 visas to travel to the country were only issued for business travelers or to visit religious sites and just as the country opened up, the Covid pandemic arrived and restrictions were reimposed.

It was a photograph of an arch, behind a peloton of cyclists, sent to me in an email from NABS stalwart David Kennedy, that gave me the impetus to make initial enquiries on the practicalities of visiting Saudi Arabia. Initially, it was thought that the arch was in the UAE but I quickly found that the photo was taken during the Saudi Tour. Subsequently, I found another four arches in the vicinity, any one of which would be worth the trip.

These arches are located in the vicinity of the town of Al Ula, about 650 miles northwest of the capital Riyadh. Some of the arches are remote, but they can be easily reached by car providing you are familiar with the area, although it is best to walk the last few hundred yards or so to avoid deep sand.

Al Ula has recently opened a new airport which makes getting there much easier as it is only a 2.5-hour flight form Riyadh. There are two main roads: Highway 375 that runs north from the airport to Al Ula, some 20 miles away, and then on to Winter Park and Highway 70 that runs east/west from Winter Park.

Three of the arches are located along Highway 70 about five miles east of Winter Park. Imposing Jabal Alfil, also know as Elephant Rock, is the most famous of all of the arches. There is a large sign on the highway pointing to the road to the arch. The road is unpaved but is compacted sand that can easily be driven with care by car. It leads to a parking area a short distance from the large arch. The area is usually open 24 hours but as I was there at the start of the Eid celebrations it didn’t open until 4 p.m. The arch has a span of 31 feet and a height of 104 feet. 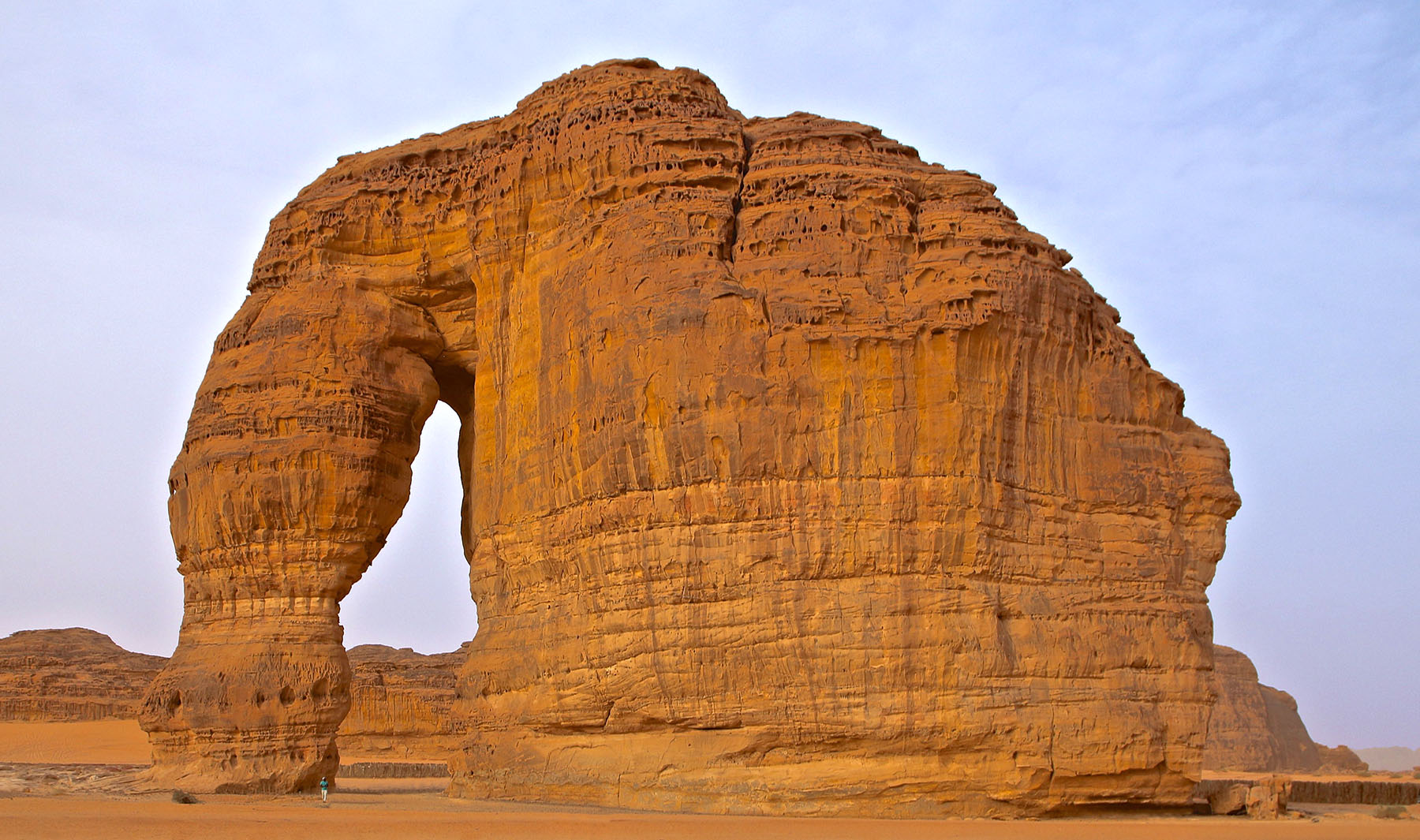 Shortly before the sign for the Elephant, sublime Vessel Rock can be seen to the north. It is possible to drive toward the arch and park on the left just before a small mound of sand. Hike over the mound to the arch. A 4WD vehicle would make short work of the mound. Vessel Rock, so called as it resembles a vase, can also be seen from the road on the way back from Elephant Rock to the main highway. It is then possible to drive to Vessel Rock from there with 4WD. The arch has a span of 35 feet and a height of 75 feet. 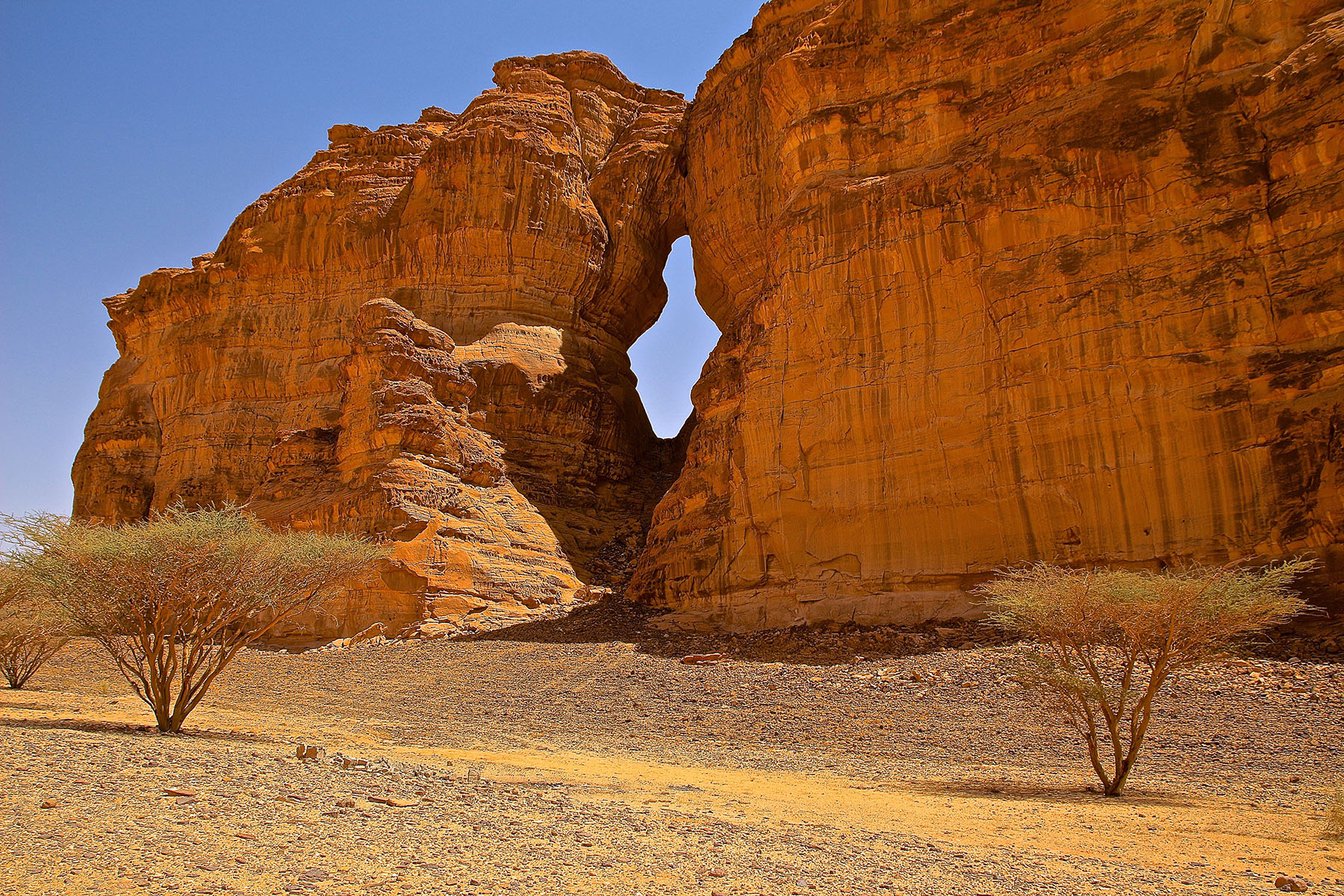 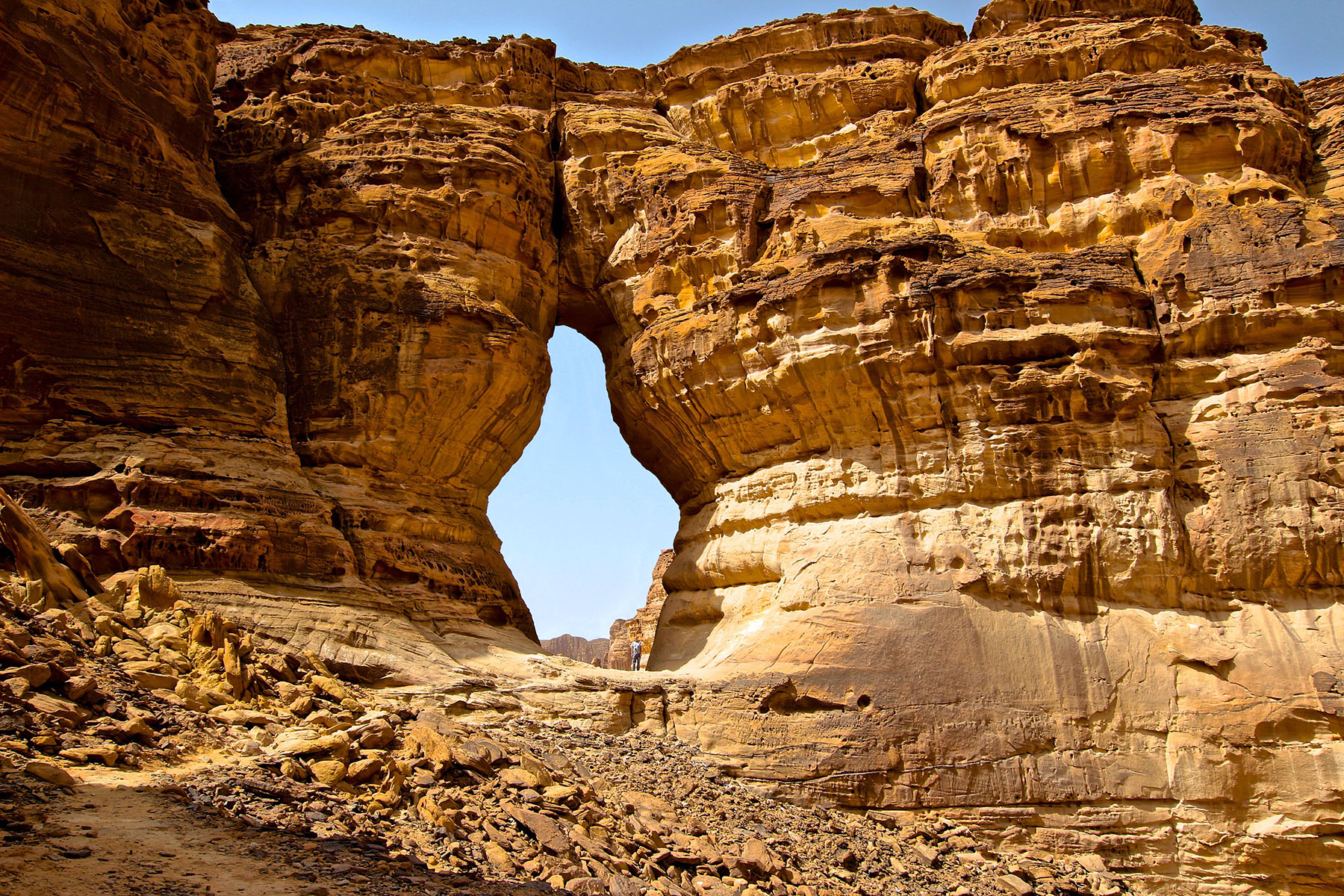 The third of the arches, Sparhawk Arch, is about .5 miles further east of Elephant Rock on the north side of the highway. This arch has a span of 30 feet and a height of 30 feet. 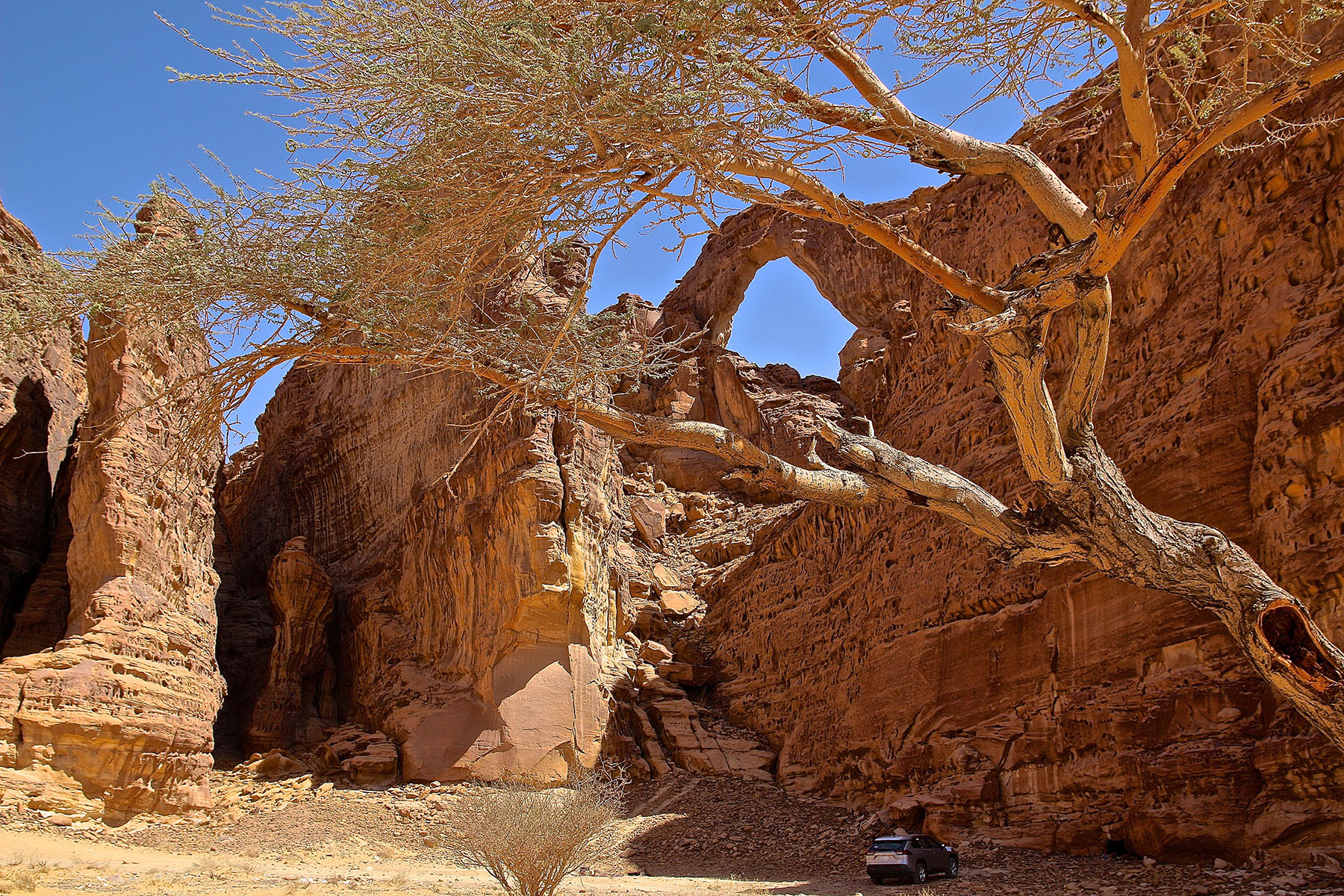 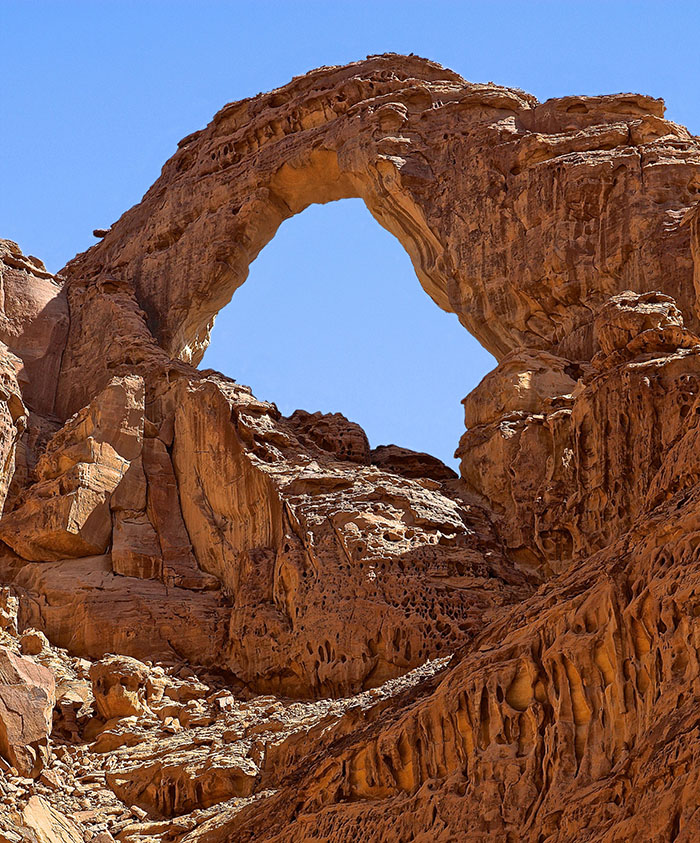 The other two arches are more remote but can also be reached by highway vehicle. Spectacular Rainbow Rock (featured image at top of article) is described as being on Arc Mountain, which led me to believe that the arch would be high up and difficult to get to. In fact, it is at ground level and a small paved road leads directly to it, although 4WD might be required for the last hundred yards or so. This arch has a span of 135 feet and a height of 67 feet. 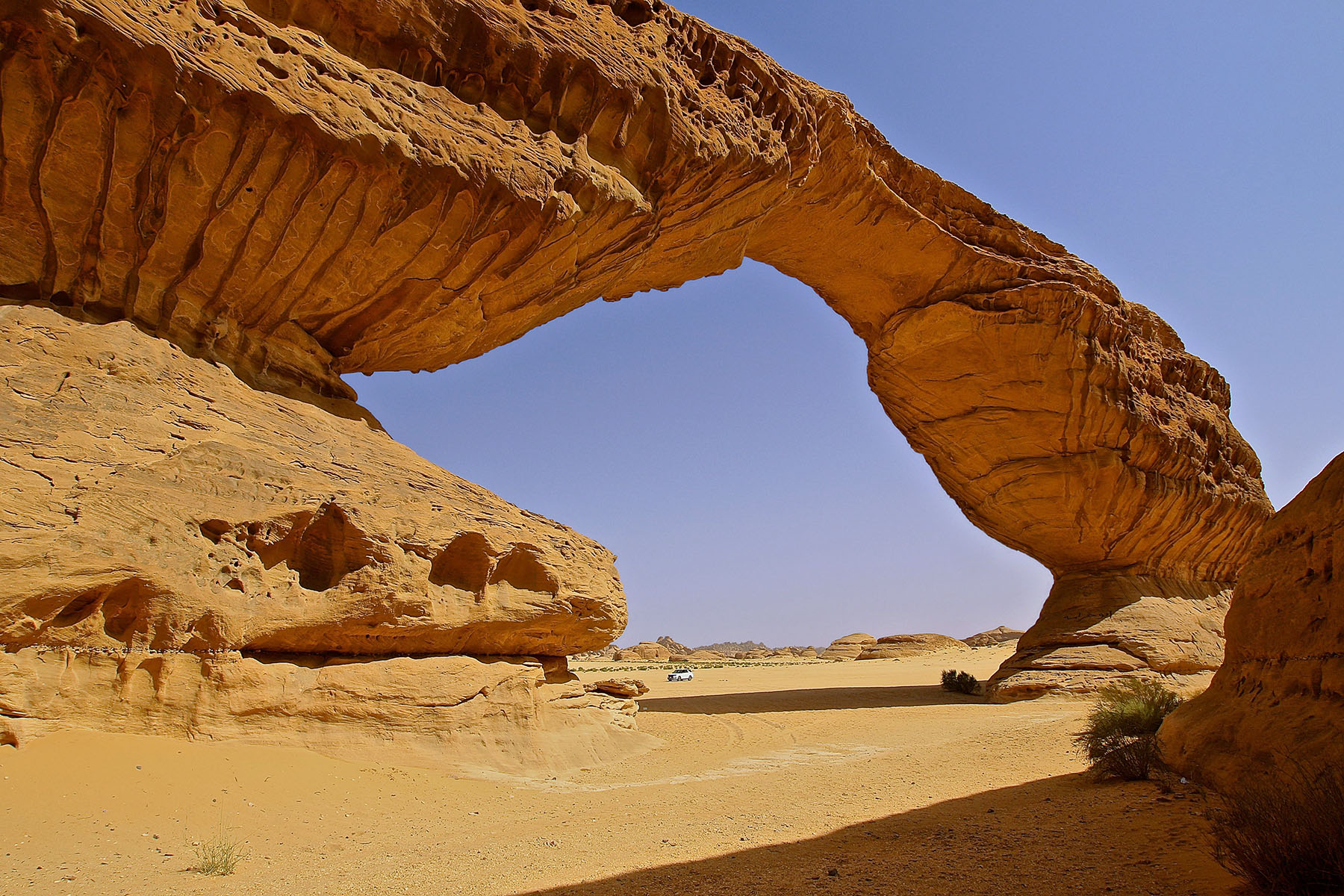 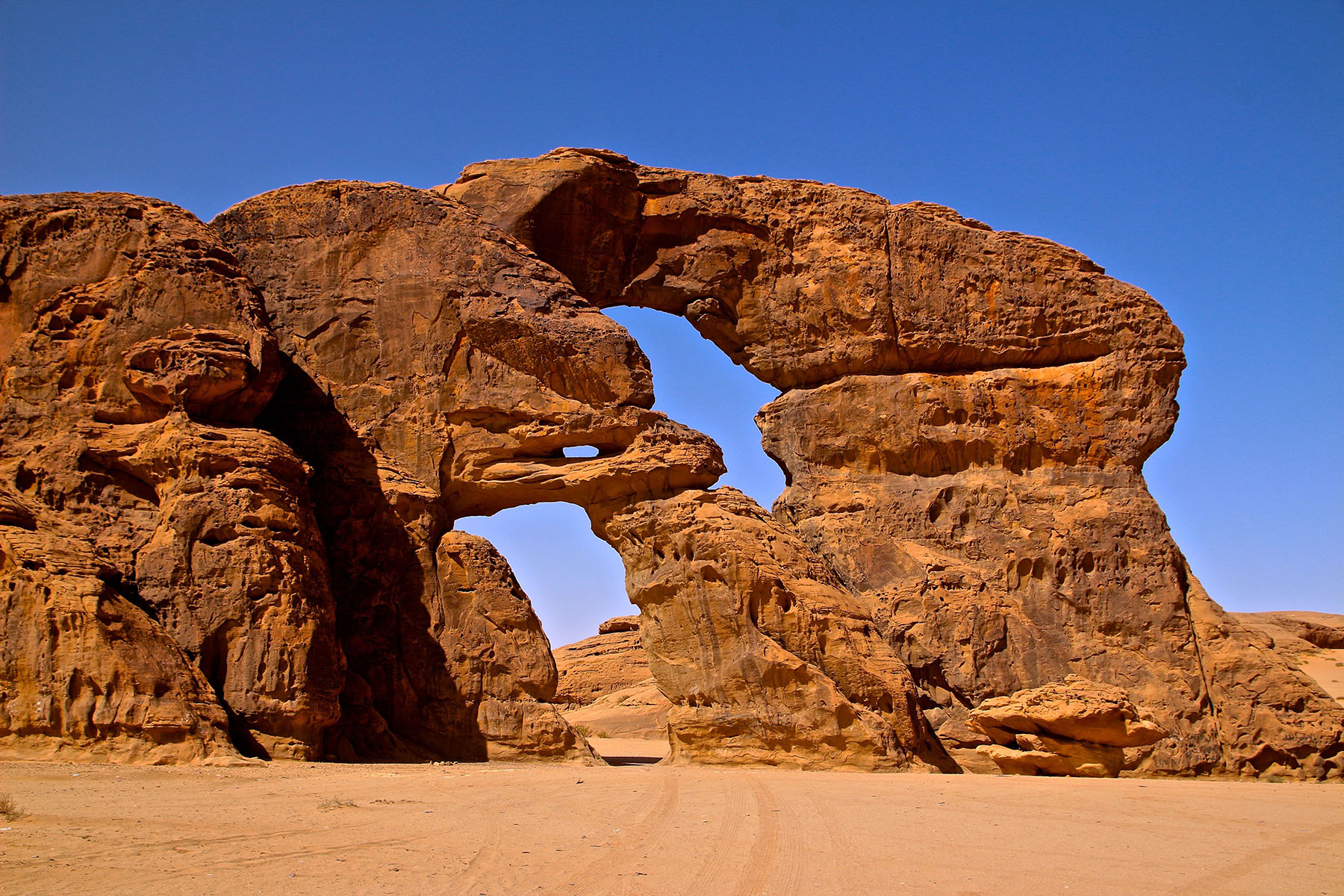 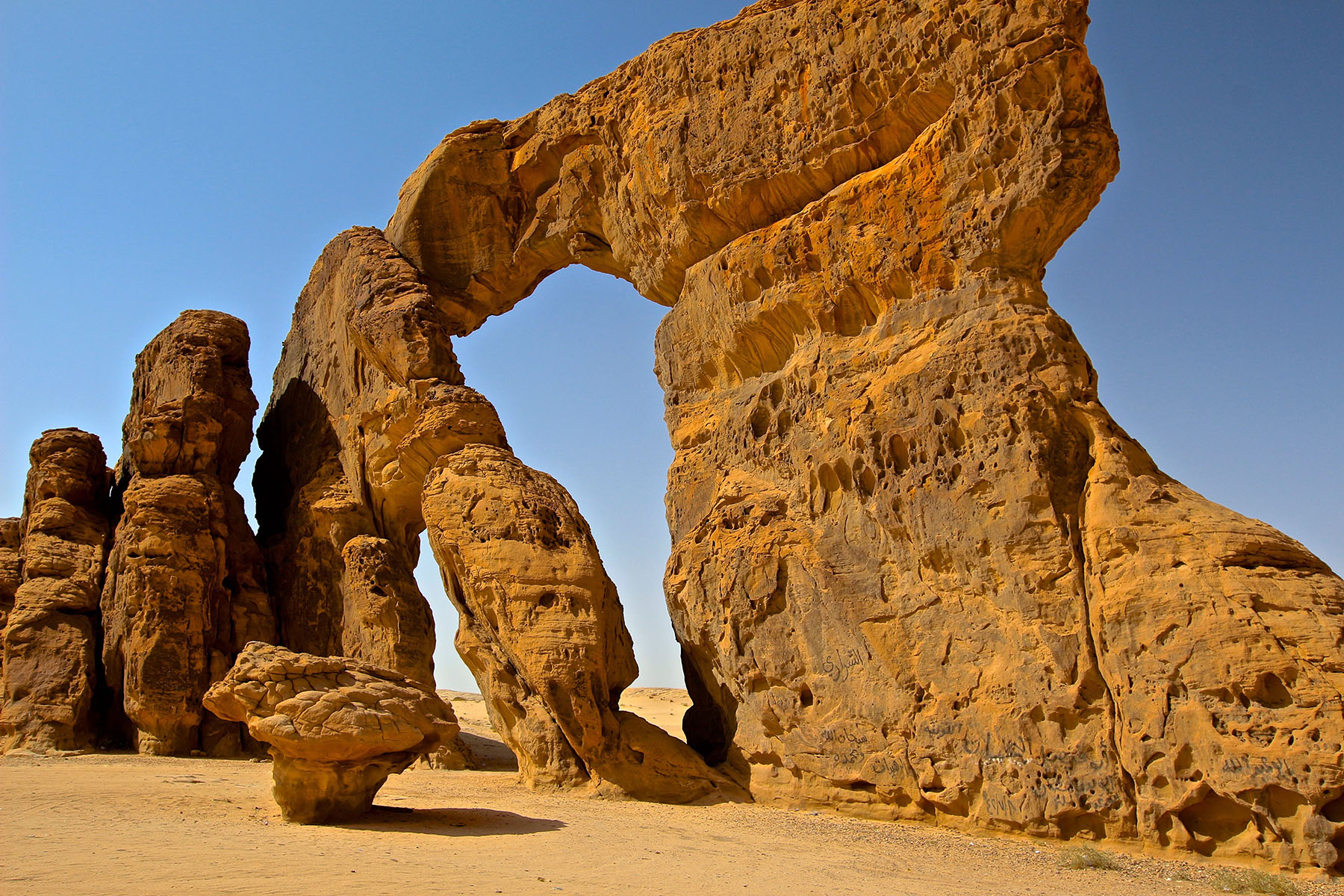 I was fortunate to stay at The Royal Mawahib Compound where the owner, Abdullah Albalawi, arranged guides for me. He also works at the Film AlUla at the Royal Commission of AlUla so he was able to arrange for me to visit some of the area’s sites such as Hegra, the second city, after Petra, Jordan, of the Nabataean Kingdom. Here there are many rock tombs that were only opened to the public in September 2019. I also got to walk around the Maraya concert hall which is a bit strange but also magnificent.

My only disappointment was that I was not able to visit the large arches at Mahajah as the area was closed for conservation. I never found out whether it was completely closed or whether it might have been possible to photograph them from a distance. I hope to return when it reopens.

Check out Ray’s daily postings on facebook.com/groups/naturalarchesworldwide and see his website at archesuk.com.