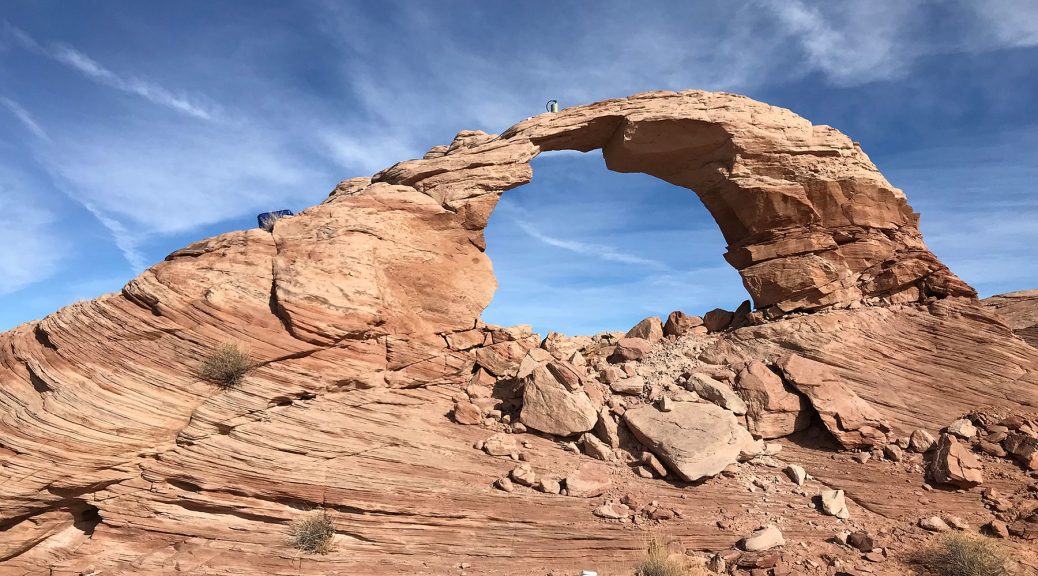 Helicopters produce a variety of tones, the lowest of which is inaudible to the human ear, but is often the most powerful. Common civilian helicopters emit infrasound energy in the range of about 10-30 Hz, which can coincide with the natural frequencies of culturally significant rock landforms such as arches and towers. Sparse data from past studies suggest that close-proximity helicopter flight is capable of stimulating potentially damaging resonance of such landforms, but the structural response and long-term impact of this added energy remain poorly understood.

The researchers performed a series of controlled helicopter flights, using broadband seismometers and nodal geophones to measure the vibration response of five sandstone arches and six sandstone towers to infrasound emitted by a Bell 206 helicopter. They compared the measured vibration of the landforms, as well as nearby reference sites, to infrasound emitted during flight to distinguish periods of induced resonance. Alignment of the landform’s natural frequencies with those of the helicopter noise (including Doppler-shifted frequencies and overtones), the landform’s mode shape compared to the direction of infrasound propagation, and helicopter distance all contribute to the ability of helicopters to excite resonance and, in turn, the amplitude of induced vibrations.

They found that the range of landform size and geometry susceptible to helicopter-induced resonance is narrow (i.e. precise frequency alignment with the source energy is required), and that measured peak vibration amplitudes are generally below values thought to be instantaneously damaging. Nonetheless, the geographic reach of helicopters is virtually unlimited, and many well-known landforms experience regular overflights, validating concerns that sustained exposure to anthropogenic airborne energy may result in adverse structural degradation of culturally significant landforms over time. 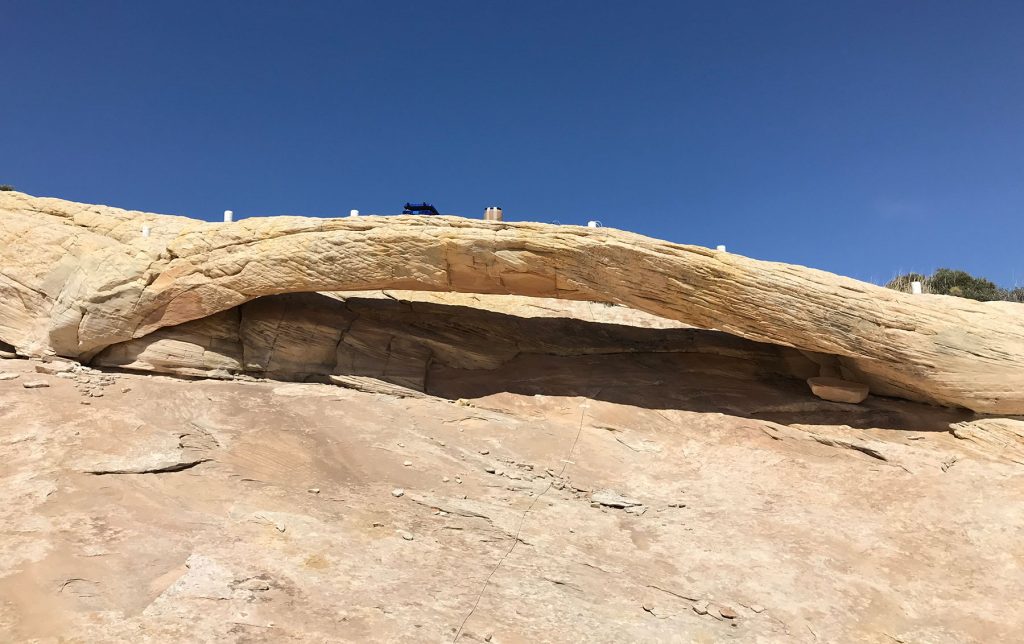 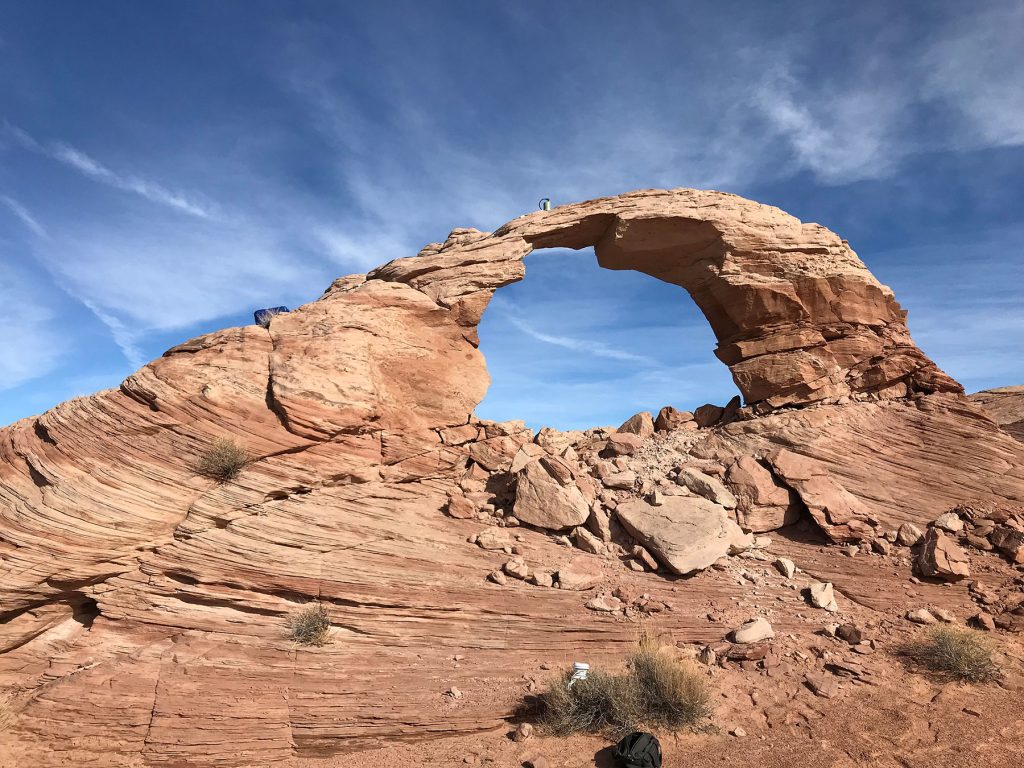 A video clip of a drone flyover of Arsenic Arch is below, showing the instruments on the arch.

Can you give me an overview of this research in lay terms?

Rock arches and towers vibrate back and forth all the time—just like a manmade bridge or building—though, the vibrations are so small it’s hard for a human to notice. Certain elements in an arch’s natural environment can cause the arch to vibrate faster, like wind or earthquakes. Our study tested the ways helicopter noise causes arches and towers to vibrate in ways that they don’t necessarily experience in their natural environment. We found that the size, shape, and material of the rock, along with the type, speed, distance, and direction of the helicopter contribute to the vibration levels of each geologic feature. We found the range of rock arches and towers susceptible to strong vibrations from exposure to inaudible helicopter sound is narrow, and the vibration levels measured are generally below values considered immediately damaging. Nonetheless, helicopters can fly nearly anywhere, and many arches and towers experience regular helicopter flyovers, validating concerns that inaudible helicopter sound may cause damage to culturally significant rock features over time.

We borrow techniques from a variety of fields, including seismology and structural engineering. Engineers have studied the vibrations of manmade structures for decades, and we use the same methods to understand the resonant frequencies of landforms like arches and towers. Few other groups study the resonant frequencies of arches and towers, so the natural frequencies of many of the features we’ve studied are shared here for the first time. Similarly, few past studies have recorded the vibrational response of natural landforms to helicopter noise, so we share those results here as well. In particular, we explore factors like the landform’s geometry and material properties, and helicopter speed, direction, and distance, and how they relate to the vibration of the landform.

Did you come across anything surprising or unusual in the course of your study?

We were also surprised that the propagation direction of the helicopter noise is extremely important in coupling with the mode shape of the landform exposed to the noise. If the noise is emitted in a horizontal direction, a landform that tends to vibrate horizontally will respond with greater vibrations than a landform that tends to vibrate vertically. In hindsight, this seems obvious, but we didn’t confirm this until our data showed an arch inclined towards vertical motion vibrating at the same velocities when the helicopter was thousands of meters away, banking with the noise directed downwards, as when the helicopter was only a few hundred meters away with the noise directed horizontally. This really showed to us that landform geometry and noise direction are important in describing the impact helicopter noise has on these landforms—blanket statements like, “If a helicopter is x meters away, then a feature will vibrate x meters per second” do not fully capture the nuances of landform vibration response to energy sources.

Are the sounds emitted by helicopters unique, or could other sources of sound potentially cause damage to these rock features?

We are also investigating the impact that trains, road noise, and earthquakes can have on rock arches and towers, though those energy sources aren’t featured here.

What are the implications of this research, and why should people care?

I think too often we consider the desert landscape as still, and without much life. Our vibration measurements remind us that the rocks around us are moving all the time, and this particular study helps to remind us that we might be impacting the natural evolution of the landscape in ways we don’t even consider. I think people would generally oppose taking a jackhammer to Delicate Arch, but not everyone has the repercussions of helicopter flight near these culturally significant landforms at the top of their list of environmental concerns. Arches and towers are iconic in the desert southwest so it’s important that we work towards preserving these important features.

Have these results (or similar results by yourself or colleagues) been previously publicized by your institution or reported on by the press? If so, where and when?

None of our past-published works have focused on helicopter-induced resonance of natural landforms, but “Anthropogenic sources stimulate resonance of a natural rock bridge” (Jeffrey R. Moore, et al., 2016) received publicity by the University of Utah and other media outlets. That paper highlighted how an artificial reservoir, Lake Powell, excited resonance in Rainbow Bridge, one of the world’s largest natural bridges.

[Jeffrey Moore also published an article in the Fall 2015 issue of SPAN, the newsletter of the Natural Arch and Bridge Society, on “Monitoring the Structural Dynamics of Natural Arches” and reports on that work can be found at https://geohazards.earth.utah.edu/arch.html.]

How did this work come about?

This work came about by the Native American Consultation Committee (NACC, formed in the 1990s for indigenous groups to provide official stances on the regulation and management decisions for Rainbow Bridge National Monument) raising the question of how helicopter tours were impacting the structural integrity of Rainbow Bridge. The NACC is comprised of representatives from the Hopi, Kaibab Paiute, Navajo, San Juan Southern Paiute, Ute Mountain Ute, and Zuni tribes, all of which share a historical connection with Rainbow Bridge. While Rainbow Bridge resonates at such low frequencies that it is unlikely to be susceptible to damage from helicopter noise, the question opened up further exploration with smaller arches and towers that could resonate at the frequencies emitted by helicopters.